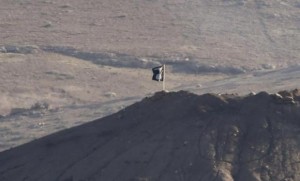 A top figure in the Islamic State’s self-declared police force, which has carried out beheadings, was himself found beheaded in eastern Syria, a monitoring group has said. Reuters has more:

The man was an Egyptian national and was known as the deputy “emir” of the al-Hesbah force in a Syrian province, the British-based the Syrian Observatory for Human Rights said on Tuesday.

His body, which showed signs of torture, was found near a power plant in al-Mayadeen city in the Deir-al-Zor province, it said, citing contacts on the ground.

“We do not know whether Islamic State killed him or whether it was local people or other fighters,” said Rami Abdulrahman, who runs the Observatory, which reports on events in Syria through a network of contacts on the ground.

“Either way it is important, because he was a very important man,” he said, adding that he believed it was the first time that an al-Hesbah member had been killed in this way.

Islamic State, an offshoot of al Qaeda which has drawn in foreign fighters and is also known as ISIL or ISIS, has seized land inSyria and neighboring Iraq. It has been the target of U.S.-led air strikes in both countries since September.