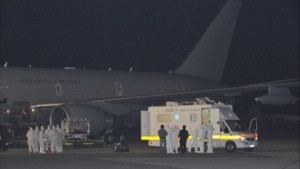 The only recorded Ebola patient in Italy has fully recovered and was released from hospital on Friday after a month of being flown to Rome from Sierra Leone where he worked as a doctor treating others stricken by the disease. Reuters report:

The 50-year-old Sicilian man has been identified only by his first name, Fabrizio. He contracted the hemorrhagic virus while working for humanitarian group Emergency during the worst Ebola outbreak on record.

“For the first few days, partly to keep my mind active, I tried to examine every symptom I was experiencing scientifically,” Fabrizio told reporters in his first public appearance since contracting the disease.

“Then there came a moment when I lost consciousness of what was going on around me and I don’t remember anything that happened for about two weeks,” he said, thanking those who cared for him during his illness.

He said that after he regains his strength he may return to Sierra Leone to continue treating Ebola patients. Ebola survivors are generally believed to be immune to future infection from the strain that made them sick.