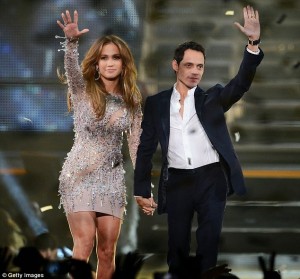 They say the rich also cry and here’s another one of those situations.

Famous and rich Latino singer — Jennifer Lopez, was married to Marc Anthony in June 2004, after seven years of marriage the couple split and went their separate ways.

Jennifer opened up to HBO Documentary on how she felt after divorcing Marc Anthony.

‘I remember being on the set and being in my dressing room and not feeling like I could get up in the morning and there’s just no pain like that.

‘There’s no pain or failure like going through a divorce.
That hope, that dream, that fairytale, with that first time that dream gets blown to pieces, you feel like you’re going to die.

‘You feel like you failed. You feel like no matter how hard I tried, I couldn’t make it work.’That wasn’t my dream. My dream was for us to always be together.You never want to break up family.’

Jennifer Lopez has dated and broken up with four men, counting them: Her first lover was Ojani Noa a Cuban Waiter and their relationship lasted for a year (1997-1998), her second lover was Cris Judd and their relationship lasted for two years (2001-2003), she was previously engaged to Ben Affleck, but the couple dumped each other and called the wedding off the day before the planned ceremony in September 2003.

She moved to Marc and after seven years of marriage she dumped him.