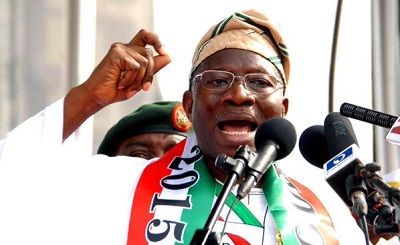 Amid criticism of his administration’s perceived lukewarm attitude to the problem of corruption, President Goodluck Jonathan has said that his strategy for combating the menace is not by indiscriminate arrest and imprisonment of people.

Speaking to party supporters at the flag off of the Peoples Democratic Party, PDP, presidential campaign in Lagos on Thursday, Mr. Jonathan said that the best way to tackle corruption is to strengthen public institutions.

“I stand by due process. Any country that does not respect due process is a jungle”, Mr. Jonathan said.

“They say to be strong is to jail people indiscriminately. For 300 years. Is that where you want to go?”

Mr. Jonathan was apparently referring to the presidential candidate of the All Progressives Congress, APC, Gen. Muhammadu Buhari (retd.), who vowed to imprison anyone that steals public funds.

“When we come into power, anyone who steals Nigeria’s money will end up in Kirikiri Maximum Prisons. We are going to make sure that Nigeria’s wealth belongs only to Nigerians”, Buhari was quoted as saying when he presented the APC’s flag to Umana Umana as its Akwa Ibom governorship candidate in Uyo on Tuesday.

President Jonathan, who began his speech by stating that he was addressing young Nigerians, especially first time voters, asked them to inquire from their elderly uncles and aunties, the truth about Buhari’s government in the 80’s, adding that they must choose between a vote to be relevant or be treated as a “nonsense person”.

“They said they will fight insecurity. When he (General Buhari) was Head of State, did he buy one rifle for the Nigerian soldiers?

“Ask them what they did with the defence budget”.

President Jonathan also used the opportunity to apologize to federal civil servants for the delay in their December salary, attributing it to the IPPIS system which, he said, shut down after officials attempted to divert some of the salaries.

The president also down played media reports that the Movement for the Emancipation of the Niger Delta, MEND, had thrown their weight behind the opposition All Progressives Congress, APC.

“Orkar, the leader of MEND, is in South African prison because he was procured by some Nigerians to assassinate me”, Mr. Jonathan said.

“The man who is in South African prison for killing Nigerians is endorsing some people”.

Earlier, President Jonathan and his ruling PDP had officially opened their campaign towards next month’s presidential and governorship elections in Lagos, with a vow to emerge victorious at the polls.

The president and all PDP state governors made the declaration at the Tafawa Balewa Square.

In his opening remarks, Ahmadu Ali, the Director of the Jonathan-Sambo Campaign Organisation, said that the PDP, unlike the opposition All Progressives Congress, APC, belongs to all Nigerians.

“The PDP is not the exclusive preserve of an individual who has turned Lagos into a cow to be milked”, said Mr. Ali.

The Chairman, Peoples’ Democratic Party (PDP), Lagos State, Tunji Shelle, stated that the large turn-out of supporters at the party’s rally in Lagos indicated support for the re-election of President Jonathan.

The party later presented its flags to the governorship candidates of the respective states.