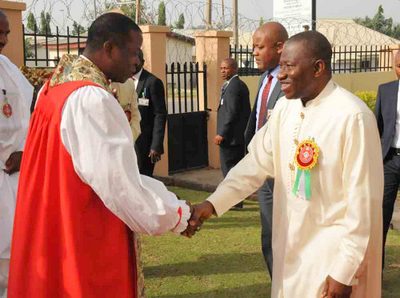 President Goodluck Jonathan on Sunday likened the current challenges facing Nigeria to the hardship encountered by the Israelites on their journey from Egypt to the Promised Land.

He told the congregation that just as the Israelites eventually made it to Canaan despite the numerous challenges that confronted them on the way, Nigeria would get to its desired destination.

The president urged Nigerians to continue to support the government and pray for the country, adding that government would keep doing its best to overcome the challenges.

“This is a period in which the whole world is being challenged, just like some of the passages we read.

“Whenever I think about all these happenings in Nigeria it makes me remember the journey of the Israelites from Egypt to the Promised Land.

“When God promised they were going to be given a land full of milk and honey, ordinarily one would have expected them to just walk in and get the milk and honey.

“But they had to cross the Red Sea; that was a challenge. They had to meet people like Annas and others. That was a big challenge, but because God wanted them to be there they were able to get there.

“Surely, we will get to where we want to go as a nation. We may have the road bumps, we may have the obstacles but we will crush them and pass them.

“All we want to request is your continued support and your prayers, and we promise we will continue to do our best”.

The president’s foster daughter, Inebharapu Paul, got married to Simeon Onyemaechi, on Saturday.

The wedding reception was later held at the International Conference Centre in Abuja.

While thanking God for success of the entire marriage process, Mr. Jonathan asked the congregation to join him in prayers for peace and happiness to reign in the couple’s home.

The president was joined by his wife, Patience Jonathan; his mother, Eunice; and some of his aides.

Special prayers were offered by the Primate of the Anglican Church, Nicholas Okoh, for the couple, the first family and for the nation.

He later presented a carton of the Anglican annual devotional as a gift to the president as well as the church’s hymn books and calendar to the couple.