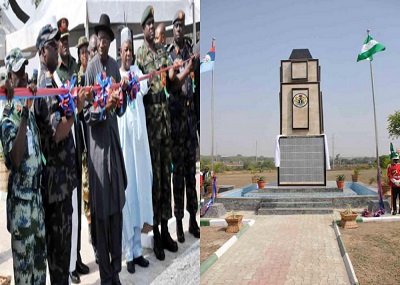 Mr. Jonathan made the call at the National Cemetery, Abuja, while unveiling the Cenotaph built in memory of the nation’s fallen heroes from 2011 to date.

The president said that the military are doing their best under the circumstances they were working.

He said that the government would continue to encourage the military and provide the soldiers what is required to perform their duty.

“I am not saying that there are no bad eggs; there are definitely few cases where people exhibit behaviour that is not expected of them.

“We always have such situations all over the world, in all sectors of government, so, it is the duty of the officers to detect those who are committed to this country, early enough.

“So that those who will create problems for them, those who will betray others and lead to massive death of officers and men when in operations, are removed early enough.

“If we are able to filter among ourselves and identify such people they may be deployed in different ways.

“I am not advocating retirement of people except it becomes very clear that somebody has committed an offence that requires that”.

The president said soldiers must be trusted people who should not betray themselves or troops.

He said if anybody is suspected to have such behaviour, the best thing is for the person to be redeployed to a position that he will not be an enemy to his colleagues.

He said that the unveiling of the cenotaph was unique as it carried the names of officers and men that were deployed in various operations and paid the supreme sacrifice.

He said that the cenotaph was may be the only link between them and the future generation, their children and grandchildren.

“It is a project that is dear to me and that is why I mentioned that we need this kind of a memorial for the remembrance of our past heroes.

“Probably in the future as a nation, we may even have a bigger museum that photographs of some of our officers will be displayed.

“So that future generation can always know the various contributions people had made over the years”.

Earlier, the Chief of Defence Staff, Air Chief Marshal Alex Badeh, said that the cenotaph was a symbol of the gratitude of the Federal Government and Nigerians for the sacrifices of officers and men in uniform.

Mr. Badeh said that the erection of the cenotaph was one of the various projects embarked upon by the government and the military leadership not only to immortalise departed colleagues, but to also provide succor to the families they left behind.

“It is also a reminder that the relative peace we enjoy today is because some persons had laid down their lives so that others can live in peace”.

“Accordingly, I urge all Nigerians to continue to support our armed forces in this difficult time as the military continue to find lasting peace in the North-East and other troubled spots in the country”.

The president also decorated some personnel with “OPERATION ZAMAN LAFIYA” medal at the occasion.