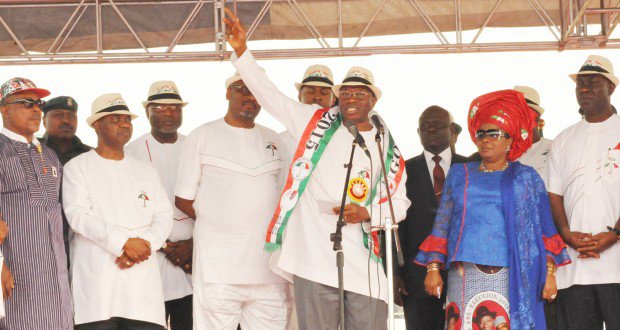 President Goodluck Jonathan on Friday during a rally in Enugu State, took a swipe at the presidential candidate of the All Progressives Congress candidate, Gen. Muhammadu Buhari (retd), saying the former head of state cannot remember his own mobile phone number.

The president, who spoke extempore, was apparently responding to previous statements made by Buhari and accused the APC presidential candidate of deceiving Nigerians by promising to revive the economy without explaining how he would go about it.

“Is it now that Buhari cannot even remember his own phone number that he can change the economy of the country”, Jonathan asked.

The Peoples Democratic Party presidential candidate said that although he did not like to “go personal during campaigns,” “sometimes circumstances demand that certain things must be said.”

Taking his attacks further against his political opponent, the president described Buhari as belonging to the medieval age, adding that the APC candidate intended to run the Federal Government as a medieval king.

He said, “We cannot run the government as if we are in the medieval age; we cannot run a government where somebody said he would throw people into jail.

President Jonathan not done yet, read a speech by Gen. Ibrahim Babangida (rtd.) after he overthrew Buhari’s regime through a military coup on August 27, 1985 to justify his claim that the APC candidate is not one that keeps his promises.

Babangida, in the portions of the address read by Jonathan, justified Buhari’s overthrow by pointing out that the latter did not live up to the promises he made to Nigerians when he ousted a democratically elected civilian government headed by Alhaji Shehu Shagari in a military coup.

Noting that Buhari “deceived Nigerians” from 1983 to 1985, Jonathan quoted Babangida as saying, “The initial objectives of Buhari’s intervention were betrayed as there was a general deterioration of standard of living in the country”.

The PDP presidential candidate also pointed out that Babangida accused Buhari of being “too rigid in his attitude to national issues” and “became alienated from the people” in the course of his stay in power.

He, therefore, challenged Buhari to tell Nigerians how he intends to revive the economy.

Jonathan said, “They are telling young Nigerians that they are going to change the economy but they have not told us how they want to manage the economy more than us.

“I said in Lagos that I want to work with young people, not to deceive people.

The president also reiterated his commitment to the fight against corruption. “There is no government that has fought corruption more than we do”, he said, noting that some previous administrations pretended to be fighting corruption while oppressing their enemies.

He recalled that Buhari jailed some prominent Igbo sons while in office as head of state, including former Vice-President Alex Ekwueme and former governor of old Anambra State, Chief Jim Nwobodo.

Stressing that Buhari jailed politicians on trumped up charges, Jonathan said, “You can no longer carry people and put them in prison for 301 years”.

The president also accused his opponent of having a wrong idea of corruption because he (Buhari) believes that every wealthy Nigerian is corrupt.

In what looked like a veiled attack not only at Buhari but former President Olusegun Obasanjo, Jonathan accused some unnamed persons of making spurious claims against him especially as it concerned corruption and the external reserves.

The President said, “They are saying that government is corrupt but they are not telling us what they are going to do to stop corruption. Let them go back to their consultants to coach them, then I will listen to them.

“They should tell us how they are going to manage the economy better than we do.

He also reiterated his claim that Buhari did not equip the military while he was the head of state.

Jonathan said that he had done more than his predecessors to shore up the country’s defence.

“For 30 years, we had only one frigate, now we have four additional frigates”, he said.

He also pointed out that Buhari did not find any woman worthy enough for appointment when he was the military head of state and pleaded with Nigerians to assess him and Buhari by judging their performances during their respective terms in office.

He said, “They have deceived us before and they want to deceive us again.

“Go and find out whether these people are deceiving you or are telling you the truth.

“They came with promises but immediately they came in, what they did was to jail Jim Nwobodo for 201 years”.