Jonathan To Campaign In Ogun Today, May Visit Obasanjo 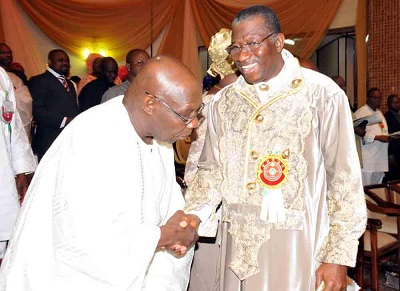 In continuation of his presidential re-election campaign, Dr. Goodluck Jonathan will be in Ogun State on Monday to solicit support of voters.

Apart from a rally slated for the 35,000-seater Moshood Abiola International Stadium, President Jonathan is also expected to pay homage to former President Olusegun Obasanjo at his Abeokuta residence.

The former president has been critical of Mr. Jonathan lately, with the former publicly kicking against the incumbent’s second term ambition.

Confirming the rally at the Annual New Year Thanksgiving Singsong Service organised by the former Governor of Ogun State, Gbenga Daniel, at Abraham’s Tabernacle Church, Sagamu, Ogun State, the governorship candidate of the Peoples Democratic Party, PDP, in the state, Gboyega Isiaka, called on party members to come out en mass to welcome the president.

He also urged them to vote for him and other candidates of the PDP at the forthcoming election.

As at Sunday evening, PDP leaders were seen putting finishing touch to plans for the rally.

Apart from a likely visit to Mr. Obasanjo, the president will also pay the traditional homage visit to the Alake of Egbaland, Adedotun Gbadebo, in his palace.