There was an unpleasant incident in Abuja yesterday during the ceremony dedicated to the Armed Forces Remembrance Day Celebrations. 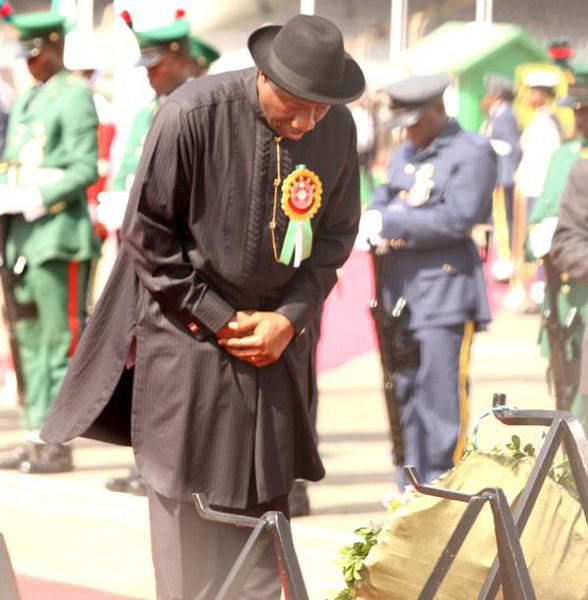 According to Punch, the event was held at the Central Area and saw in attendance country tops, including President Goodluck Jonathan, Vice-President Namadi Sambo; the President of the Senate, David Mark and others.

The senior officials came to lay wreaths and honour those who protect Nigeria.

However a serious stir occurred during the occasion, with involvement of a member of the elite Guards Brigade and President Jonathan.

The guard who participated in a specially organized firing party for the event was seen  fidgeting with his gun which got stuck in the back of his belt.

Soon, the nozzle of the gun lowered, following which 2 members of the Presidential Guard rushed to circle Jonathan with a human shield. The Presidency guards’ first reaction was that it could be an attack on the country leader.

Another officer representing GEJ’s guard hurried to the soldier to remove him from the column, however soon the light was shed on the situation after the soldier had explained the problem. The guards just helped him and the ceremony was back to normal.

It was reported that Jonathan had not panicked over the incident caused as he was standing in front of the Monument of the Unknown Soldier.

It was further obtained that the military always use blank bullets for such ceremonies, thus the lives were not jeopardized.

After the last round of the shooting the President traditionally freed the white pigeons from a huge cage at the cenotaph.

It would be recalled that Jonathan also visited the injured soldiers in some wards of the Cantonment’s Hospital to personally wish them a quick recovery.

Apart from that GEJ yesterday visited Maiduguri, Borno State capital, which came as a big surprise to many Nigerians who had not been aware of this plan.