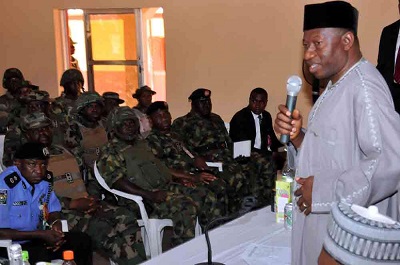 The Peoples Democratic Party, PDP, has described as morale boosting, Thursday’s visit of President Goodluck Jonathan and the Service Chiefs to Maiduguri, Borno state, saying it further demonstrates the president’s commitment to the ongoing war against terrorism in the country.

The National Publicity Secretary of PDP, Mr. Olisa Metuh, in a statement he issued in Abuja on Friday, said Jonathan’s assurances to the military on their welfare and equipment had become a catalyst to the overall determination to win the war against insurgency.

“In visiting the internally displaced persons in their camp, the President has gone further to show his abiding affinity with the people and commitment to bring succor and hope to the downtrodden”, he said.

Commending the president for ensuring professionalism in the military, the PDP spokesperson said the armed forces have been rebuilt, reequipped and is being re-engineered to adequately confront the current terrorism challenges facing the country.

He, therefore, called on Nigerians to continue to support the President, as he remains focused in ensuring the unity and stability of the nation.