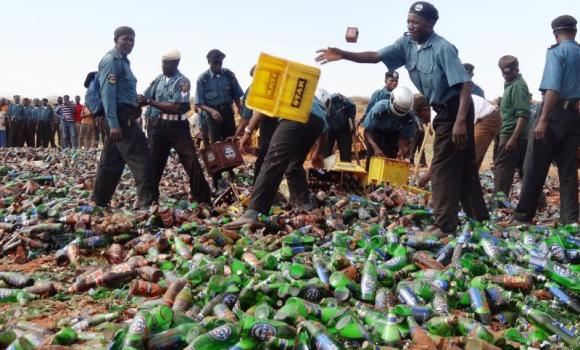 The Kano State Hisbah Board said it destroyed 326,151 bottles of beer out of the 363, 853 it confiscated from members of the public in the past three years.

This is contained in a statement issued in Kano on Saturday by the officer in charge of operation at the board, Sani Nasidi.

The statement noted that the destruction of the commodity was carried out in three phases within the period under review.

The statement indicated that there were a total of 197, 173 bottles of beer that were yet to be destroyed by the board.

“These remaining bottles of beer are being kept at some of the Local Government areas where they were impounded and they would be destroyed at a later date.

“But the other bottles of beer were destroyed at Hawan Kalibawa in Dawakin Tofa Local Government area of the state”, he said.

The statement explained that the special operations were carried out in collaboration with the eight Local Government Areas that made up Kano metropolis.

The statement, which commended other security agencies in the state for their support and cooperation with the board, called on them to maintain the tempo.

It, however, called on the state government to provide the board with the necessary facilities particularly operational vehicles to enable it discharge its duties more effectively.