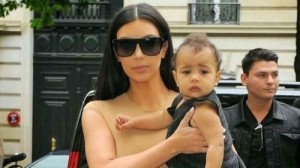 Ok, this is just ridiculous and a total waste of money; at least this is my opinion.

Famous reality TV star, Kim Kardashian is spoiling 17-month-old daughter rotten as she just got her a £35,000 (N9m) dolls house.

According to US Weekly, the doll house comes with a marble bathroom with North West’s initials “NW” encrusted in gold on the bathtub.

Along with the doll house, the celebrity website also reports that Kim Kardashian bought a Dolce & Gabbana leather jacket with “North” etched in Swarovski crystals.

North West has been lavishly spoilt this Christmas as Heat Magazine earlier reported that Kanye West dropped $62, 000 on a diamond-encrusted tiara and $12, 000 on a toy replica of his black SUV for his daughter.

Kim Kardashian was also on the end of a spoiling this Christmas as her husband, Kanye West, reportedly splashed $7,000 on an Yves Salomon fox fur jacket for her.