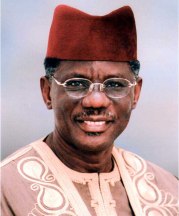 A chieftain of the ruling Peoples Democratic Party in Katsina State, Senator Ibrahim Muhammad Ida, has dissociated himself from the re-election bid of President Goodluck Jonathan.

The former senator, who was a member of the sixth legislative assembly, was named among the president’s campaign team.

Speaking with journalists on Saturday, Senator Ida said he was not aware of his inclusion in the president’s re-election campaign team as widely published in some national dailies.

The ex-senator, who spoke through his senior special assistant, Alhaji Auwalu Buba, said he had been in Saudi Arabia since the past seven days before the publication linking him with Jonathan’s campaign.

He, therefore, denied any association with the campaign team, stating that there was no prior contact between him and the presidency regarding the campaign.

He described the action as yet another way of jeopardising his political future by some retrogressive elements, even as he said it was defamatory.

Mr. Ida, however, urged his supporters to disregard the publication linking him with the president’s campaign team.