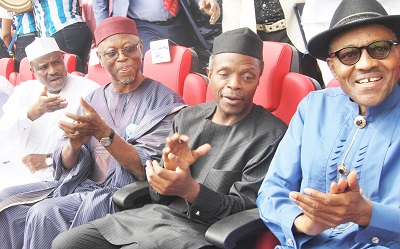 A few days after the All Progressives Congress, APC, National Chairman, Chief John-Odigie-Oyegun assured that the party will not probe past administrations if it wins the presidential election next month, its presidential candidate, Muhammadu Buhari, has adopted a different stance, promising that all corrupt politicians will end up in jail once he is elected as president.

Buhari, who gave the assurance on Tuesday during the APC rally and presentation of the party’s flag to Umana Umana as its Akwa Ibom governorship candidate in Uyo, said he would block all loopholes through which money was being siphoned out of the country.

“When we come into power, anyone who steals Nigeria’s money will end up in Kirikiri Maximum Prisons. We are going to make sure that Nigeria’s wealth belongs only to Nigerians”, he said.

The former head of state decried the nation’s over-dependence on oil, saying the country would not have faced the current economic crisis if the country had invested in agriculture.

According to Buhari, Nigeria used to export tin and columbite, but all of a sudden stopped producing and exporting these minerals with the oil boom.

On the power sector, the APC presidential candidate stated that many industries had shut down operation because of epileptic power supply, adding that Nigerian producers were unable to compete on the global stage as a result of huge cost of production.

Buhari assured Nigerians that his government would create over three million jobs yearly to take care of the teeming youths, who are unemployed.

Rivers State Governor, Mr. Rotimi Amaechi, who is also the Director General, Muhammadu Buhari Campaign Organisation, said he was ashamed to read on the pages of newspapers a claim by the Peoples Democratic Party that things had continued to improve in Nigeria from 2011.

He added that governors decided that the excess crude fund be shared when the governors noticed that the account continued to deplete each passing month.

Amaechi said, “I was ashamed to read on the pages of newspapers where PDP said things had improved from 2011 till now.

“Oil price used to be between $120 and $145 before now. Our savings used to be between $45 and $46bn. We had over $10bn to $20bn in excess crude. The reason why the governors asked that excess crude money be shared was that after each meeting we had, if the money was $10bn, before we come back for another meeting, it would be $8bn. Who has taken the $2bn? We did not know.

“When we discovered that our money was being taken away with reckless abandon without accounting, it was then we asked, ‘Oga, please share this money. You are not a bank, and if it were a bank, they would add more to the money’.

“During (the late President Umaru) Yar’Adua and (a former President Olusegun) Obasanjo, oil subsidy used to be N300bn, but under our current president, it is N2.3trn and over”.