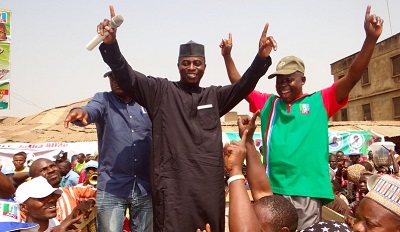 A call has been made to Nigerians to vote and defend their votes with determination and tenacity in the forthcoming general elections.

The call was made by the Kwara State House of Assembly Speaker and flag bearer of Ilorin West/Asa Federal Constituency under the All Progressives Congress, Razak Atunwa, during a campaign visit to Magaji Ngeri, Badari, Oko Erin, Baboko, Wara Osin/Egbejila wards of Ilorin West.

Mr. Atunwa, according to a statement by his spokesperson, Olawale Rotimi, commended the commitment of the people towards change and development in Kwara and Nigeria as a whole and urged them not to be moved by the threat or intimidation to frustrate electoral process come February 2015.

The lawmaker, who described the forthcoming election as a major opportunity to change Nigeria for better, called on the electorates to prepare themselves, mobilize people from door to door and adopt legal methods to defend their votes in the 2015 general election.

“We cannot make any change if we do not vote and defend our votes in the forthcoming elections; we must exercise rare courage, steadfastness and bravery to stand with our votes after casting them and ensure the results are well documented and announced before us by the INEC officials”, he stated.

“The police and army are to protect the rights of electorates, so we must all be aware of this fact and not be intimidated by the presence of armed forces in our various polling units. I will wear my shirt and jean, vote and wait until the votes are counted and announced before the people, thus I charge you again to be fully prepared against any abnormality in the 2015 presidential election by being brave and valiant to monitor your votes during the coming election”, he added.

Mr. Atunwa decried the present situation in the country, stating that the country is worse off than it was four years ago and urged the people to reject the PDP come February 14 and 28.

He assured Nigerians of rapid development if APC is voted into power and promised the people of his constituency employment, empowerment, infrastructural development and quality representation if elected on February 14.