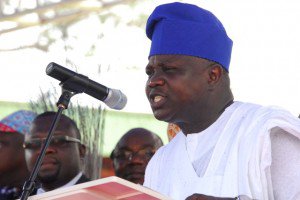 The governorship candidate of the All Progressives Congress (APC) in Lagos State, Mr. Akinwumi Ambode, has maintained that he is in the race to serve.

The APC candidate, at the weekend, reassured supporters and stakeholders that he was in the race to serve humanity and lead by example.

In a statement by his Director of Media and Communications, Steve Ayorinde, Ambode said Lagos had a record of “excellent service” in the past 15 years and the more than 17 million people living and working in Africa’s largest city-state, “deserved a tested hand, who would continue in that tradition of excellence”.

The APC candidate said: “The governor that Lagos State deserves at this period of our continued growth and development is a man with a track record of performance and excellence; a man who is tested, who understands governance and is an experienced administrator who will not experiment with the resources and growth template of this state. I, Akinwunmi, Ambode, is that man”.

He was speaking at the third Annual Lecture of the January 9 Collective (J9C), where he spoke on the topic of the lecture, “2015 General Polls: Beyond the Rhetoric of Credible Elections”, which was delivered by Prof. Anthony Kila.

According to Ambode, selfless service and leadership by example should be the hallmark of an elected official, who is desirous of making a meaningful change and lasting impression in the lives of the electorate.

“This is why we in APC have been very vocal about the need to have a credible election; to have a process that is fair and transparent and to have an election that does not seek to systematically disenfranchise the electorate”.

He added that his party, the APC, would continue to urge the Independent National Electoral Commission (INEC) to ensure that all the eligible six million registered voters in Lagos State get their Permanent Voter Cards (PVCs).

“This is the only way to ensure that INEC’s preparedness is beyond rhetorics so that next month’s elections can produce leaders that the people want”.

Ambode also met with the Zonal Chairman of the Nigerian Union of Petroleum and Natural Gas Workers (NUPENG), Lagos Zone, Comrade Tokunbo Korodo; the National Coordinator of the Civil Society Club of Nigeria (CISOCON), Comrade Babatunde Ashafa; the chairman of the Council of Arewa Chiefs, Alhaji Sani Kabiru and a group of senior citizens representing retired civil servants at his Gbagada campaign office.

The APC candidate also reiterated his plans for sports development when he spoke at a charity football match in Ikorodu yesterday, organised to drum up support for his ambition.

Ambode used the occasion to explain his T.H.E.S.E plan which, as part of his campaign manifesto, emphasises the harnessing of Tourism, Hospitality, Entertainment, Sports and Excellence to get the youth of Lagos State engaged in those areas.

“Our vision is clear about the direction that Lagos State should face after 15 years of solid foundation and progress. And this is what our campaign is all about. We must consolidate and build on the achievements of the past administration of Asiwaju Bola Tinubu and the incumbent actualiser, Babatunde Fashola.

“Lagos deserves excellence through a combination of requisite experience and selfless service. Lagos does not depend on sharing of oil revenue any longer.

“The state is creating an enabling environment for businesses to thrive and for citizens and corporate sector to pay their taxes. Sports, entertainment and tourism are goldmines waiting to be tapped. This is no time to experiment with the future of our state and we are convinced that the majority of Lagosians appreciate that fact”.