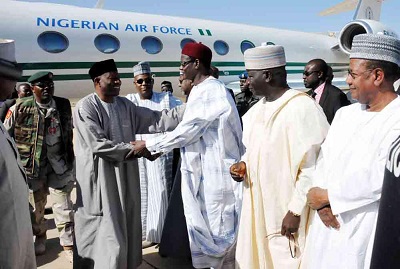 The people of Chibok community on Friday accused President Goodluck Jonathan of insincerity in the search for over 250 of their daughters kidnapped last year April by suspected Boko Haram gunmen from their school.

The people of the town, who spoke through Dr. Allen Mannaseh, said it was unfortunate that over 277 days after their girls were abducted, the federal government had not been able to bring them back and President Jonathan was also silent on their fate during his surprise visit to Maiduguri on Thursday.

Mannaseh, who doubted if the federal government was doing anything at all to rescue the abducted schoolgirls, lamented that it was unfortunate that the people of Borno, especially Kibaki, failed to understand why the president visited only Maiduguri on Thursday.

“As a director of information of the Chibok Community nationwide, I am short of answers when people call to ask me why did the president keep mute about the Chibok girls during the occasion and place he should have touch on it?

“We feel pained always because this is one of the ethnic nationalities that mobilised and voted for President Jonathan more than any other in the entire north east. Why are we being shunned always?

“Had President Jonathan not visited Maiduguri yesterday (Thursday) ahead of the campaigns, what would he tell us when he finally visits Borno?

“The Baga issue deserves more than just condemnation. With this kind of attitude towards peoples pains, especially parents of the Chibok girls, how can we who supported, mobilised and voted for him start shouting in the ears of these parents to vote PDP?

“We are saddened as parents of Chibok girls that more than 278 days ago, our daughters have been forcefully taken away from us. To me, I was disappointed by Mr President during his visit to Maiduguri yesterday he did not even say a word to the parents of Chibok girls or sympathies with them. It showed that Federal government has forgotten about those girls. Unfortunately, the girls have so far spent 278 days in the enemy’s camp”, he regretted.