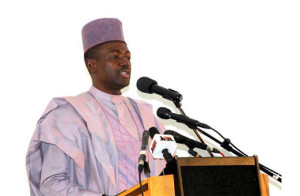 The Peoples Democratic Party (PDP) yesterday attacked the immediate past minister of information, Mr. Labaran Maku, saying he is “a destroyer and an ungrateful party man”.

The PDP North-Central Zonal Vice Chairman, Yusuf Ayitogo, who made this position known during a visit to the Niger State Governor, Babangida Aliyu in Minna, the state capital, said Maku had bitten the finger that fed him.

“He is out to destroy PDP in Nasarawa State by defecting to the All Progressive Grand Alliance (APGA). Maku is a destroyer who wants to reduce the votes of the PDP in Nasarawa State. It is the PDP that made him what he is today; rising from commissioner to deputy governor and then minister”, he said.

Ayitogo, who was in the state to reconcile PDP members, who lost out in the primary elections, expressed regrets that the former PDP minister defected to a party which has no firm footing in the state.

“APGA has office only in Keffi and does not have any in the local government areas and wards in Nasarawa State. People who served under President Jonathan are the ones betraying him and they should be called to order.

“Labaran Maku cannot win any election in Nasarawa State and that will be clear to him in the February election. I believe that majority of those who defected from the PDP did so out of inordinate ambition. It is an issue of greed”, he said.

Also speaking, Governor Aliyu blamed the crisis that followed the party primaries on the automatic waiver given to new members. He, therefore, advised that in the future, the issue of automatic waiver should be carefully looked at.

The North Central zone leadership of the party later went into a closed door meeting with party members in the state.