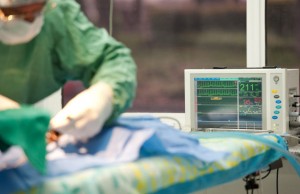 When a Brazilian taxi driver got into a free for all bar brawl, he didn’t know when the fight actually came to a head and he got stabbed in the head and it took him more than three hours before he realized he’s been stabbed. Read more from The Huffington Post:

Juacelo Nunes de Oliveira, 39, was stabbed during an argument, and it took more than three hours before he realized there was ablade running through his skull to his jaw bone, CNN reports.

Oliveira was at a party in Agua Branca last Sunday when he was stabbed four times; three times in the torso — one of which perforated a lung — and once in the head. He was driven to a nearby hospital and transferred to an emergency facility in Teresina, 62 miles away.

“He had the knife lodged in his head for this whole period but he was not aware of it,” Dr. Gilberto Albuquerque told CNN. “We believe the shock and a bit of the drinking may have helped him not to understand the knife was still in his head.”

X-ray photos released by the military to CNN and Globo show the knife protruding from behind his left eye. Albuquerque said the knife stopped only when it struck the victim’s lower jaw.

Doctors told 9News that Oliveira is lucky to be alive.