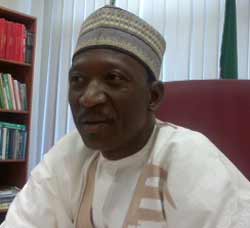 Senate President David Mark on Saturday called on the people of Sokoto North Senatorial District to return Sen. Ahmed Maccido to the Senate in 2015.

Maccido (PDP-Sokoto), is the Chairman of the Senate Committee on Appropriation.

Mark made the call during the distribution of motorcycles, water pumping, sewing and grinding machines purchased by Maccido to the constituents in Sokoto on Saturday.

Mark explained that Maccido’s re-election would enable him to continue with the good work he had been doing in line with the manifesto of the PDP.

He contended that the people of the district were lucky to have a committed senator as Maccido.

Gov. Ayo Fayose Ekiti of State, who was the chairman of the occasion, said the items would improve the living standard of the beneficiaries.

“We will also continue to work for the peace, unity and progress of Nigeria”, Fayose, added.

Maccido said the items distributed were aimed at further uplifting the welfare of the people of the constituency and others across the state.

“These items were provided in appreciation of the sustained support and cooperation I have been receiving from the people in the last seven and half years”, Maccido stressed.

The State Chairman of the party, Alhaji Ibrahim Milgoma, and the State Secretary, Alhaji Kabiru Aliyu, promised judicious distribution of the items.