Just found this beautiful report on The Nation about love in its purest  and a union between a deaf and dumb couple.. 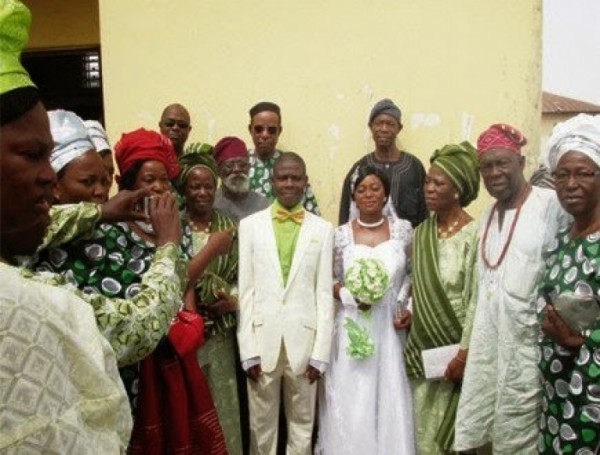 Their meeting
Through a sign interpreter, Mrs. Helen Famuwagun  the visibly elated bride said she lives in Owo and has been looking for a nice and responsible man, which she has now found n her heartthrob, Kunle.

“We met in 2013 and courted for over one year. I know his parents and they too know me and my parents very well,” Omolola announced.”

Asked if the suitors took some time coming, she replied that

“many suitors were coming, but I decided to choose Kunle, for his understanding and caring nature. Kunle is a man after my heart,” she gesticulated to her interpreter, who in turn explained to the reporters.

The couple who both attend GOFAMINT Church said they are happy to have scaled all hurdles to eventually solemnise their relationship. Through their interpreter, Kunle said he does not want any woman in his life, except his brand new wife, Omolola.

Kunle disclosed that he met his heartthrob at a friend’s place on May 10, 2013 and immediately took interest in her.
His words,

“I liked her immediately I saw her.”

Asked if he would someday take another wife, he shook his head, gesticulating to the interpreter that he would never consider taking a second or third wife.
He however declared that he would like to have many children, depending on God’s wish.

My name is Helen Famuwagun (Mrs.), I am one of their teachers in GOFANMINT, what I’ve noticed is that most of them don’t marry normal persons but their likes. This is because they understand each other and are able to interact through sign language. In the church, we teach them that they should not ‘see’ each other before getting married. And this they obeyed because we monitor them very well. We also tell them that their bed must not be defiled, imparting in them the way of God. As a preacher and pastor, I preach to them that it is a sin to make love out of wedlock. Of course we relate with them through sign language, because of their nature and they are well receptive.

Famuwagun also revealed that by nature, people with such disabilities are special people and are very jealous. This she said is why they often married their likes, with whom they share good understanding, and compatibility. She said that such understanding is critical, because they could be very fatal when they get angry.
She also disclosed that this was not the first time such marriage will be taking place.

Boundless joy
The visually impaired sang danced and were all happy. One of them Temitope Ariyo, who is the leader of the School Band, said “we are happy to play for our colleague. Although we cannot see them, they see us. Today is another happy day for the couple “.
Olorunfemi Seun, and Tosin Oladapo, two back-up singers who are also visually impaired also expressed their joy on the occasion.

Bride’s parents
Chief Anthony Adeyeye Onipede and his wife,Taiye are Omolola parents.
According to them, their daughter was not born deaf and dumb, but suddenly observed that she could not talk or hear when she was a toddler.

“Omolola was born as a twin, but her twin sister died at infancy. She was still crawling when we discovered that she could not talk or hear,” the parents chorused.

“I am her father. I did not immediately know that she could not talk or hear. I was in Onitsha then as a soldier .It was my late father who first noticed the problem. We went to places; hospitals and even churches, thinking it was a spiritual attack, but no progress.”
“I made efforts to take her to school. She went to deaf and dumb school in Akure; she also went to Technical College, Owo, where she learnt Painting and decorating”

Asked whether her daughter was forced to marry a challenged person like herself, Mrs. Onipede said

“No, it was Omolola who said she would marry Kunle. They both went to the same school, and I think they would understand each other better. I am happy for their coming together and I am told their children will be normal when they begin to have children.”

Groom’s parents
The parents of the Bridegroom exhibited great joy throughout the occasion. When interviewed, Kunle’s father, Rufus Oluwadare, who is a Shepherd at Christ Apostolic Church (CAC), Akure said

“my son was not born like this. I am the happiest man today for my son to be getting married. I have done two weddings for my two children this year but this is the most interesting and most unforgettable among them all. Yes, they have challenges but see how God has compensated them with this crown? What I know is that if a bad person blocks their way God has a way of compensating them.”

“He is very selective and does not seem to want anybody except this lady. They have introduced some divorcees and single mothers to him, but he always rejected them.”

She added that her son was not born with speech challenges. She however blamed her enemies who inflicted the condition on him, when he was a baby. She said

“I believe it is the handiwork of evil doers. But what do we do? We still thank God for everything.”