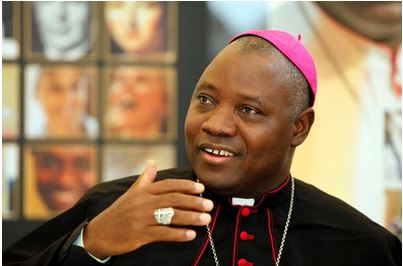 The Catholic Bishops Conference of Nigeria (CBCN) has distanced itself from the recent remarks made by the controversial Catholic Priest and Founder of Adoration Ministry, Enugu Catholic Archdiocese, Rev. Fr Ejike Mbaka who in his New Year message described President Jonathan’s administration as one that has been plagued with bad luck and poor performance.

In an interview with ThisDay newspaper, the CBCN President, Archbishop Ignatius Kaigam, said that Fr Mbaka’s remarks does not represent the position of the Catholic Church in Nigeria. He said that Fr Mbaka was just one out of the 30million catholic faithfuls in Nigeria and that the position of the Catholic church on any matter of National importance is communicated only through the CBCN.

“There are more than 30 million Catholics in Nigeria, Fr Mbaka is just one Catholic, if he makes a statement, it cannot be the voices of more than 30 million Nigerian Catholics speaking. So Nigerians should avoid hasty generalisation. Mbaka cannot speak for the church, only the CBCN can speak for the church. Those who are complaining, should go to Fr Mbaka and find out why he is saying what he is saying. I tell you,  even the Canon Law forbid a priest  to engage in partisan politics,” Kaigama said

In a related development, the Catholic Bishop of Abuja Metropolitan, Cardinal John Onaiyekan has said that given the rules of the Catholic church, Rev. Fr Ejike Mbaka ought to be sanctioned following his remarks about President Goodluck Jonathan’s administration.

“Mbaka will take responsibilities for his own actions. I do not believe in my mind that the way things are in Nigeria, any Catholic priest has the mandate to decide which of the political contestants should be voted for. What most of us will do is to tell people to vote according to their conscience and then, we tell the authorities to allow people to vote freely and fairly. I wouldn’t be surprised if most people are not happy with the statement he made. From my reactions, you should see that I do not agree with him. I don’t believe a priest should be doing that. But, like I said, Mbaka is a priest of his own type. If he was in my archdioceses, I will have sanctioned him long ago for the kind of things and utterances that he makes. But, he is not under my diocese; he has a Bishop to handle that if there is any need. I hope that people are not thinking that we are sending Mbaka to talk rubbish, how can they think that? If you want to hear anything even not official but at least, authoritative, then, you listen to the bishops. Rather than him and I don’t see any bishop talking that way” the Cardinal said