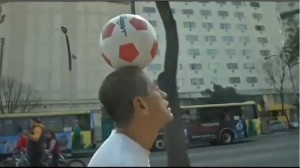 A 60-year-old Mexican man taking a cross-country walk with a football placed on his head to call for peace in the country has completed the first 1,200-mile leg of his journey. UPI reports:

Juan Marquez Nieto, 60, arrived Sunday in Mexico City, 57 days after starting his walk across Mexico to promote peace as part of the Uniting Wishes for Peace movement.
http://www.nikefreerunshoesplus.com nike free 5.0 grey
Nieto, who balances a soccer ball on his head while he walks, said he plans to head north for the second leg of his tour.

Uniting Wishes for Peace organized a march in November from the southern state of Guerrero to Mexico City to demand answers from the government regarding the disappearances of 43 students.

An accused gang-affiliated hitman is currently in custody and police suspect he killed the students and burned their bodies.