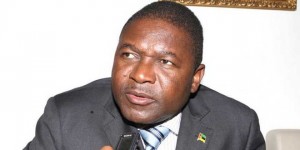 Filipe Nyusi has been sworn in as Mozambique’s new president on Thursday after his contested election victory last October, promising to modernize the economy as well as maintain peace in the east African state. Reuters report:

Renamo fought a 16-year civil war against Nyusi’s Frelimo movement before signing a peace deal in 1992, with the former Portuguese colony now looking to escape years of poverty by tapping into its huge energy resources.

“Mozambicans will never, ever fear the menace of arms,” Nyusi said on Thursday, alluding to tensions between the Frelimo and Renamo groups. “I assume the presidency willing and available listen to all parties and the people.”

Mozambique sits on large coal fields and has off-shore energy reserves. But it is among the world’s least developed nations, with the majority of its more than 25 million people living in poverty.