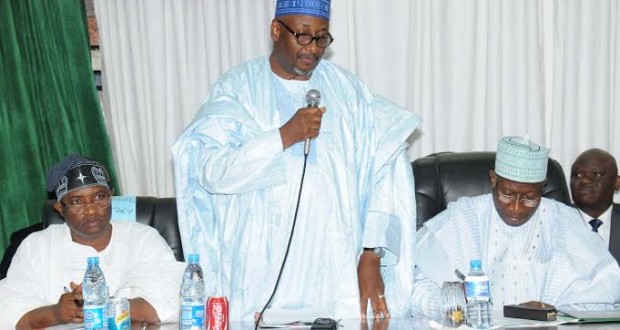 Clark berated Mu’azu for, according to him, imposing a former Chairman of the Economic and Financial Crimes Commission, Mr. Nuhu Ribadu, as the governorship candidate of the party in Adamawa State.

He alleged that the PDP national chairman misinformed the president on the purported popularity of Mr. Ribadu.

Speaking while hosting members of Northern Youth Vanguard at his residence in Abuja on Saturday, the Ijaw Leader said that he was also taken aback when the ex-EFCC chairman visited him with a team of a television and radio stations from the South-South (name withheld), asking for his (Clark’s) support.

He said, “Mu’azu and some people are misleading the President in the PDP. He imposed Ribadu on the people of Adamawa, saying he’s popular.

“Two weeks ago, Ribadu came here with television station (names withheld) asking for my support. This is the same Ribadu that was arresting people indiscriminately while he was chairman of the EFCC without following due process. He was given a list with which to work with.

“There is no justice. Those who parade themselves on newspaper pages are anti-PDP. Majority of them are working against the party and the president”.

On next month’s presidential election, Clark called on the youth to deny old men the opportunity to rule the country by voting for young and educated candidates.

He particularly urged them not to vote for 72-year-old Presidential Candidate of the All Progressives Congress, Muhammadu Buhari, who he said was “close to his departure lounge”.

He said, “My son’s and my daughters, I have gone to this very length to show you that the man called Buhari, you do not know him. You are knowing him at the age of 73. Why should they be supporting him when he wants to sleep?

“Can the man stand firmly? I will be surprised that those who are catapulting him will not say is this another game?

“Anyone of us can go at any time but Nigeria requires young men, young governors whose hands are not soiled.

“This is your country, we are building it for you. If you want to spoil it, spoil it. But for people like us who are waiting for boarding pass to rule the country for you, you will be in trouble”.

Clark recalled that as a member of the recently concluded National Conference, he had noted that those of them from 70 years and above, “were at the departure lounge waiting for boarding pass. But when I got there, they couldn’t give me my boarding pass.

“God said, ‘you have not finished your job, you are one of those who added to the damage in this country. Go and repair it’. So, they refused me boarding pass”.

He advised the youths to “Guard jealously your age. This is your time. Don’t allow a 73-year-old man who should be getting his boarding pass to leave, to rule you”.