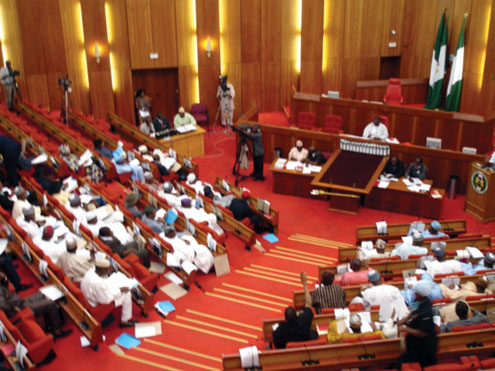 The N4.3trillion 2015 budget has passed second reading at the Senate.

The 2015 Appropriation bill was read on Wednesday by the Senate Leader, Victor Ndoma-Egba (SAN).

The bill seeks to authorize the issuance from the consolidated revenue fund of the federation N4, 357,960,000 (four trillion, three hundred and fifty-seven billion, nine hundred and sixty million) as against the 2014 budget of N4.6 trillion.

The parameters of the 2015 budget include the benchmark oil price of $65 per barrel, projected oil production of 2.2782 million barrels per day and the average exchange rate of 165 naira per dollar.

While most of the senators moved for the bill to be passed a few expressed reservations, calling for a holistic review of the budget.

Chairman of the Senate Committee on Finance, Mohammed Makarfi (PDP/Kaduna), said the budget should be handled with caution.

He advised that the cost of governance should be cut in order to save the country’s finance because this is a trying time for the country.

Ayogu Eze (PDP/Enugu), lamented that the appropriation bill is based mainly on oil.

“It is a budget of cultural reforms and also needs to be reformed”, he said.

The Deputy Senate President, Ike Ekweremadu, said the budget serves as a wakeup call to the federal government.

“I do believe that it is time for us as parliament to make sure that all the revenue items are captured as a way of having a pool of resources.

“We should be mindful of election expenses. We need to advice ourselves accordingly”, Mr. Ekweremadu said.

The bill was read for the first time on Wednesday, December 17 and was referred to the committee on finance and appropriation which would submit its report in four weeks.

The senate subsequently adjourned sitting till February 17, after the general elections.