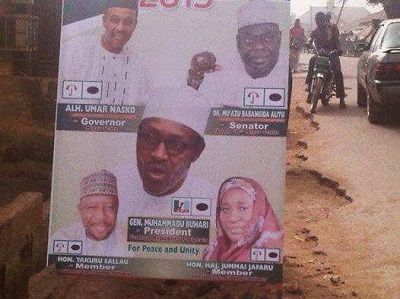 Governor Babangida Aliyu of Niger State on Sunday disassociated himself from the campaign poster circulating on social media linking him with the presidential candidate of the All Progressives Congress, APC, Muhammadu Buhari.

In a statement by his Chief Press Secretary, Ebije Israel, the governor pointed out that the poster, which depicted him, the PDP governorship candidate in the state, Alhaji Umar Nasko and two other PDP candidates with Buhari in the centre, campaigning for votes, were fake.

He attributed it to the antics of desperate politicians, who are out to mislead the electorate and cause friction in the state chapter of the People’s Democratic Party, PDP.

“It is indeed disturbing and very embarrassing to see campaign poster carrying the picture of Gov. Mu’azu Babangida Aliyu and Gen. Muhammadu Buhari.

“It is very clear that those behind the act of shame have gone beyond desperation as they are attempting to force a link between the Governor and the All Progressive Congress (APC).

“The Niger State Governor has categorically condemned the move, and he is calling on supporters of the PDP to remain focused, and vote overwhelmingly for the PDP during the general elections”, it stated.