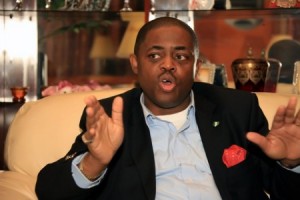 The Director, Media and Publicity of the Peoples Democratic Party presidential campaign organization, Chief Femi Fani-Kayode, has called on Nigerians to scrutinize the ties between the All Progressives Congress presidential candidate, Gen. Muhammadu Buhari (retd.) and violent groups in the country.

Fani-Kayode made the call in a statement issued in Abuja on Friday.

The PDP presidential campaign spokesman specifically called on Nigerians and the international community to beam their searchlight on the relationship between Buhari and the Movement for the Emancipation of Niger Delta (MEND) as well as Boko Haram.

The call came on the heels of MEND’s endorsement of Buhari’s candidacy.

According to Fani-Kayode, Buhari’s comments over insurgency in Nigeria were worrisome and that his endorsement by MEND, a discredited militia group, should also give Nigerians and the international community great concern.

He said as a result of the development, it would not come as a surprise if the violent Boko Haram group equally endorses Buhari.

He said, “It is important for Nigerians to take another look at Buhari’s comments about Boko Haram and the way he has encouraged Boko Haram group.

“It is on public record that Buhari had announced to the whole world that it was unfair and unjust for the Boko Haram to be tackled (after it) had killed over 20,000 innocent Nigerians, mostly women and children, after burning their homes and destroying their communities”.