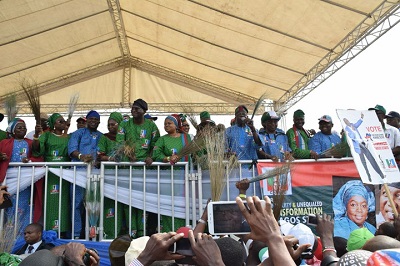 A former Lagos State Governor, Asiwaju Bola Tinubu, has said that Nigerians made a “great mistake” in electing President Goodluck Jonathan in 2011.

Speaking at the flagging off of the All Progressives Congress, APC’s rally in Lagos, Wednesday, Mr. Tinubu described the president as a man of “great excuses”, who always blames other people for his failure.

“Every time, a nation must need a great leader at the time of its trial. Nigeria is going through the trial now of choosing the wrong person in 2011”, said Mr. Tinubu, who is a national leader of the APC.

“The leader (who) never fails except other people. But luckily, recently he admitted he had failed. He has failed. No more repeat. We want Buhari”.

The highlight of the rally was the presentation of APC flags to gubernatorial and senatorial candidates in next month’s elections in the state.

Chairman of APC in the state, Henry Ajomale, said that the blood of people who died during President Jonathan’s administration was haunting the party.

“Somebody who has messed up the economy does not deserve a second chance”, Mr. Ajomale said.

“Today, we are having problems of corruption, our naira has become a waste paper, our children are roaming the streets looking non-existent jobs”.

In his address to a mammoth crowd of supporters, who thronged the expansive Old Airways ground in Ikeja’s Government Reserved Area, GRA, venue of the rally, the Lagos State Governor, Mr. Babatunde Fashola (SAN), lambasted Mr. Jonathan for criticizing his predecessors and blaming them for the nation’s woes.

He was reacting to the president’s speech last week during the inauguration of the PDP presidential campaign in Lagos, where Mr. Jonathan blamed past leaders’ neglect for the poor state of the nation’s armed forces.

Mr. Fashola said that he would always honour the sacrifice of past governors of Lagos State.

“I will not stand here, and I have never done it in all my term, to come to the public and say that I cannot do my job, because some people who served before me did not do their own. That was a lie”, said Mr. Fashola.

“Our military have been involved in combat operations in Sierra Leone, in Liberia, in Somalia. And they had weapons to fight. But even if General Buhari did not buy guns, do you want to use 1985 guns to fight (in) 2015? So it tells you the kind of government we have there.

“I will continue to honour the sacrifice of those who did this job before me. From Brigadier Mobolaji Johnson, our first governor, right through to Alhaji Lateef Kayode Jakande, Ndubuisi Kanu, late Michael Otedola, and of course our indefatigable Jagaban Borgu.

“There is a time and a season for every leader. As the complexities of a nation and a state emerges, we must find the right men and right women to do the job. The challenge at hand, with dwindling revenue to sustain what we have done here is financial management. We have found the right man to do the job”.

The outgoing governor also urged Lagosians to ensure that they collect their Permanent Voter’s Card, PVC, from the Independent National Electoral Commission, INEC, before the end of January.

“Your right to vote is not the gift of any government. It is the right that you have as a citizen in any part of the world where democracy is practised”, said Mr. Fashola.

“So whether INEC give you PVC or they give you TVC, INEC is just helping to do a job that is yours as a right. On Election Day, you will be entitled to vote and nobody, let me repeat, nobody can stop you from exercising your right to vote”.