Home Politics Nigerians Will Regret If They ‘Chase’ Jonathan Out Of Office Next Month...
Facebook
Twitter
WhatsApp 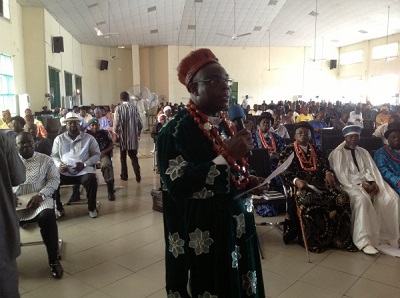 The Obanema of Opume Kingdom in Bayelsa State, HRH King A. J. Turner has cautioned Nigerians to think twice before they ‘chase’ President Goodluck Jonathan out of office in the February 14 presidential elections on the grounds of his tribe or religion, because they might end up regretting their actions later.

The monarch, who gave the warning when he played host to a pro-democracy group, United Summit Friends Development Association (USFDA) in his Abuja residence yesterday, said, “Nigerians will regret if they chase President Goodluck Jonathan out of office. They should vote him in next month’s presidential election for continuity of development.
http://www.nikefreerunshoesplus.com free nike shoes
“But if they must chase Jonathan out of office, it shouldn’t be because of sentiments. It is quite a challenging time for Mr President and I will always support any cause that will promote President Jonathan’s re-election. I thank you for finding me worthy to be your grand patron. I can’t promise that I can take you to see Mr President at this time. If he returns as president, there will be enough time for you to see him so that he will thank you for your contributions. Every deed will be rewarded”, King Turner said.

Speaking earlier, the chairman of the central working committee of USFDA, Rt Hon Jerome P. Isangedighi, thanked King Turner for the warm reception accorded the association in spite of his tight schedule.
http://www.newbalanceshoesinc.com new balance 1123
He said as part of USFDA’s contributions to President Jonathan’s re-election, the association would embark on grassroots campaign to the 774 local governments to sensitise Nigerians on the need to return Jonathan as president in the February poll.

HRH King Turner, was later decorated with the regalia of the association and president with the certificate of the Grand Patron of United Summit Friends Development Association.