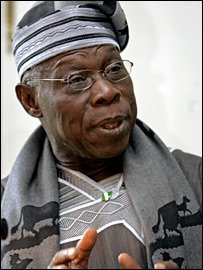 The Peoples Democratic Party (PDP) Presidential Campaign Organisation has accused former President Olusegun Obasanjo of covering up for the All Progressives Congress (APC) presidential candidate, Muhammadu Buhari (rtd.) by not acting on the Dr Haroun Adamu-led Interim Management Committee that probed the Buhari-led Petroleum Trust Fund (PTF) and found about N25 billion belonging to the fund unaccounted for.

A statement issued by the Director-General of the organisation, Chief Femi Fani-Kayode in Abuja on Saturday, said the PDP disagreed with Obasanjo’s claim that Buhari was not found culpable in any missing funds

“We believe that one of the cardinal principles of democracy, good governance and decency is to always set the record straight and let the Nigerian people know the truth. This has been the hallmark of President Goodluck Jonathan and his government for the last four years and we intend to ensure that this continues.

“We do not believe that anything ought to be hidden and we believe that in the contest for the Presidency, the record of public office of each and every one of the presidential candidates is relevant and must be subjected to scrutiny and public debate.

“It is to this end that we make reference to the findings of the Interim Management Committee probe of PTF where General Buhari, the presidential candidate of the APC, presided as executive chairman for a number of years while late General Sani Abacha was in power.

“The final report of that probe exposed nothing but monumental sleaze and the most pervasive and insidious type of corruption in PTF while General Buhari held sway there. The report concluded its findings by recommending that the PTF, under General Buhari and his entire team, be asked to explain the circumstances in which N25, 758,532,448:00 disappeared and could not be accounted for.

“As the chief executive officer of PTF at the time Buhari, and no one else, must be held responsible for this.

“The fact that the recommendation of the Dr Haroun Adamu-led Interim Management Committee was never acted upon by the Olusegun Obasanjo government is rather curious and gives us some cause for concern.

“This is especially so given the fact that the same General Buhari that was so badly indicted by the report is now vying for the exalted office of President of Nigeria.

“Worse still, one of the directors of Afri-Project Consortium, who were contracted by the PTF as Management Consultants and Project Consultants, a man by the name of Ahmad Salihijo and the one person that could have nailed Buhari and that was in a position to indict him and tell the world all that he knew about the graft that took place at PTF, died under very mysterious circumstances shortly after the Dr Adamu report was submitted to the Federal Government when Obasanjo was in power. Many people are asking whether this was a mere coincidence or whether there was more to it.

“Finally, it is curious that former President Obasanjo, an elder statesman that we hold in the highest esteem and under whose watch the Haroun Adamu probe of the PTF was conceived, commissioned and concluded, would come out and attempt to clear Buhari of all the charges made and issues raised in the report and give him a clean bill of health almost fourteen years later. The Adamu report not only conflicts with Obasanjo’s new-found position but it also proves that the position taken by the former president has no basis in reality.