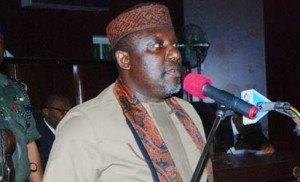 Imo State Governor Rochas Okorocha has accused the Commissioner of Police in the state, Abdulmajid Ali, of working for the People’s Democratic Party (PDP) to the detriment of other political parties including the All Progressive Congress (APC). He made the allegation while donating five Hilux buses to the Imo Police Command to facilitate its right against crime in the state.

In a statement through his Senior Special Assistant on Media, Sam onwuemeodo, Okorocha lamented that the partiality exhibited by the force was against the colouration of the police as a truly federal security outfit.

He described as shocking, the fact that the police in the state provided security for the candidates of the Imo PDP before, during and days after their primaries, but failed to extend and to the APC.

He however said that the Imo people, regardless of their profession or social status, would defend their votes in the February elections.

He appealed to federal institutions in the state to acknowledge the fact that they owed their duties to Nigerians and not to any particular political party.

Okorocha commended the Police Commissioner and the state command for fighting crime to the barest minimum.

Ali promised that the police in the state would not be partisan, but would ensure a level playing field for all.

He also warned parents to warn their wards against being used as thugs by politicians during the coming election.