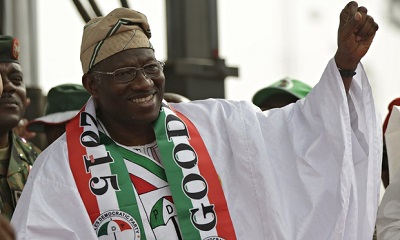 Bauchi State Governor, Isa Yuguda says only President Goodluck Jonathan can give the people of the state and Nigerians the dividends of democracy.

The governor said this, Monday, in Bauchi, at the end of a meeting held with the leaders of “Bauchi 2015 Support President Jonathan/Sambo PDP Progressive Forum.”

“We know what we want for our people; we know the kind of dividends of democracy that our people should have. And we know who can provide them; it is Jonathan that can provide them for us. Not any other person,” said Yuguda.

“I can say with a lot of confidence that when it comes to rating in terms of performance, Bauchi is second to none; and so we have so much to talk about the achievements of Mr President.

“And we have high hopes and high expectations as people of Bauchi, that when Mr President is unanimously voted, a lot of goodies will come to Bauchi State.“

The governor therefore expressed confidence that President Jonathan would emerge victorious in the February 14 presidential election. He noted that the state chapter of the party had set up the forum to campaign for President Jonathan’s reelection and ensure his victory.

“This is a very strong organisation that has been created out of the campaign structure of PDP in Bauchi State for the President and is composed of people who are highly experienced, people who are with the grassroots, who are well-respected and people who can really sell the transformation agenda of Mr President.

“And also they are adequately informed about the achievements of this administration and I do not think there is anything we, as a government, has done that they do not know.

“Bauchi people have blindly supported the opposition in the past; today their eyes have been opened.“They were carried away by sentiments.“There is no longer sentimentality in the politics of Bauchi State.

“Bauchi people are politically educated today, so the opposition should not take us for granted,” he said.