The General Overseer of the Latter Rain Assembly, Pastor Tunde Bakare, spoke about the fate of over 200 Chibok girls in 2015 on January 1, Thursday. 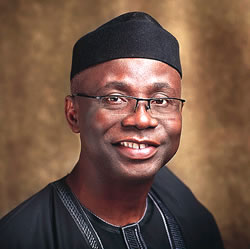 The Punch reports that in his speech during the church’s first service of the new year, the pastor has prophesied the return of the hostages. He also noted that in 2015 Nigeria would enjoy extraordinary grace from God, which would see the return of the missing girls.

“The Chibok girls will be returned this year; some people will say ‘they are just using religion to deceive themselves. How will the girls be rescued?’ You will see. I didn’t say it, it is what God said and I believe it,” the cleric said.

Pastor Bakare called on the citizens to stop tribal discrimination, which, according to him, was extremely harmful for Nigeria. He also foresaw a renewed, better Nigeria, which would bring joy to everyone.

“Whether you are from the East or from the West or from the North or the South, you will experience joy in 2015. Other nations will say ‘how did they do it.’ It will be indescribable joy. The nations of the earth will testify. I bring good tidings of joy to every part of the nation but I am not going to deceive you, we are going to go through some shakings,” Bakare said.

The cleric, however, urged to abstain from ethnic and zonal jokes: “Let us not desecrate ourselves, saying this one is Ngbati-ngbati or that one is Aboki and things like that. These are terrible things. Some people will say ‘if you see a snake on one side and a Fulani man on another, first kill the Fulani. There is also a terrible joke some people tell about the Igbos.”

The Head of the Latter Rain Assembly is also concerned about the environmental situation in the Niger Delta. He recounted how deadly the water in the area was, expressed disappointment that the people must only rely on the use of table water for washing and other domestic uses because of pollution.

“I asked what I would do with all the table water that was brought and they said ‘you would need it’. The water from the borehole dug deep into the ground was black and when I asked how I would get water to wash and do other things, they said that was why they gave me all the table water,” he recalled.

It would be noted that on the same day, January 1, #BringBackOurGirls activists organised a meeting with some of the aggrieved Chibok parents in Abuja. This was a really emotional event where some begged the Federal Government to bring at least their daughters’ bodies back, while others wondered what would President Jonathan do if his daughter was abducted.