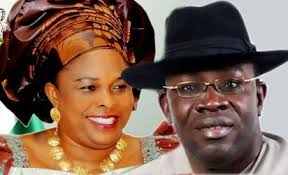 The First Lady, Dame Patience Jonathan, on Tuesday, denied reports that she had been working against the re-election of the governor of her husband’s home state of Bayelsa, Seriake Dickson, in 2016.

Mrs. Jonathan, who spoke through her media aide, Mr. Ayo Adewuyi, said there was no truth in the claim that she was opposed to the governor’s re-election.

The first lady was reacting to a statement credited to an ex-Minister of Petroleum Resources, Chief Dan Etete, who cautioned her against interfering in the internal politics of Bayelsa State.

Etete was reported to have accused Mrs. Jonathan of being jealous of the sterling performance of Dickson and promised to lead the fight to stop her from further working against the governor.

Speaking at an event to mark his 70th birthday in Yenagoa at the weekend, the former petroleum minister wondered why the first lady, who was supposed to be focused on working on President Goodluck Jonathan’s re-election bid, was busy occupying herself with how to stop Gov. Dickson from getting a second term.

But Adewuyi said Etete should be aware of the fact that Mrs. Jonathan was not a party official and hence had no role to play in endorsing public officials.

He said, “People are just heating up the polity unnecessarily because Dickson is not even contesting this year. So, where is the anxiety of alleged plan of removal coming from?

“The First Lady is not witch-hunting anybody. We have said it many times that she is not a party official that endorses candidates for elections.

“They must be afraid unnecessarily because they are aware of her mobilisation strength. It is unfortunate that an elder statesman can be making claims without proper investigation.

“He must be trying hard to curry favour from some quarters”.