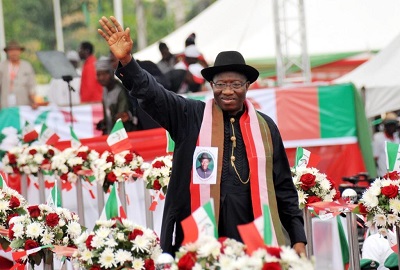 The Peoples Democratic Party, PDP, will on Wednesday formally kick off its campaigns for the February elections, President Goodluck Jonathan has said.

Speaking in Abuja on Tuesday at the inauguration of the Presidential Campaign Council, Mr. Jonathan said he and the party’s governorship candidates in all the 36 states in the elections would be presented with PDP flags.

The president noted that the handing over of flags to other categories of candidates would be subsequently worked out by the PDP National Chairman, Adamu Mu’azu.

“Tomorrow we are going to flag off the campaigns and before it used to be flagging off of the presidential campaign. In 2011 we did it in Nasarawa”, Mr. Jonathan, who is the PDP presidential candidate in the election, said.

“So it was just for the president where the president will be given the flag and then of course we go to the zones and do for the governors. But because of the shortage of time and probably it could be a modification, so that what will happen in Lagos, that is why all party members must be interested, it is not a flag off for the presidential campaign alone, but flagging off of the PDP campaigns.

“The presidential candidate will be given the flag and all our governorship candidates will also be given their flags in Lagos. The party chairman will give subsequent directive on how they will manage the ones for the senators, House of Reps and for the State Assemblies”.

The ruling party’s decision to formally kick-off its campaign in Lagos State, South West Nigeria, might not be unconnected with its determination to claim the nation’s commercial nerve centre from the All Progressives Congress.

The state has always been governed by the opposition since the return to democratic rule in 1999.

According to him, unlike in the past, the Presidential Campaign Council would now be in charge of all elections the party would be presenting candidates and not just the presidential election alone.

“We have inaugurated that body, that body should oversee all our elections. It is like a Board of Directors that oversees the management team that manages a company. We have the PDP national campaign council, not just the presidential campaign council”.

He explained that the Contact Committee, which was earlier inaugurated by the party, was set up to neutralize the “blackmail and sentiments and lies and religious issue that people are bringing into politics”.

He added, “We created this. It may not be created every time but we thought that we should have it for this particular year. The DG (Ahmadu Ali) to be is supposed to be one of the key actors but now he is the DG of the Presidential Campaign Council.

“After today’s inauguration, they will move in to their respective states, respective zones”.

The president used the occasion to charge the PDP governors to deliver their states during the polls, saying they would be held responsible if they failed to do so.