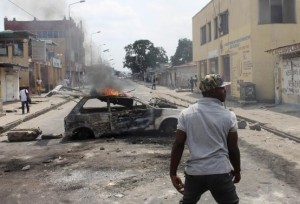 Police fired tear gas at crowds who mounted a third day of protests in the Democratic Republic of Congo on Wednesday against a proposed change to the law that the opposition posits will delay elections by years and keep president Joseph Kabila in power. Reuters report:

The government says that at least 15 people have been killed in clashes, though civil society groups put the figure much higher. Fresh clashes erupted on Wednesday on the campus of the University of Kinshasa and were reported in three other areas of the teeming riverside capital.
http://www.newbalanceshoesinc.com new balance 790
In the central neighborhood of Matete, a witness reported security forces firing live rounds at protesters, who had erected barricades of burning tires in the streets and responded by hurling rocks.

The opposition called the protests on Monday in a bid to take control of parliament and stop pro-government legislators approving a reform of the electoral code that would require a census before the 2016 presidential vote. The opposition says that would take years to organize such a national count.