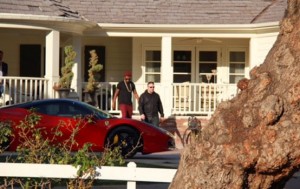 Ray J seems bent on frustrating Kim K and Kanye West’s marriage with his constant talks and appearance in weird situations and places.

He made her famous with their infamous sex-tape and it’s obvious Ray J isn’t gonna let her walk away that easy.

Kim Kardashian’s ex Ray J has reportedly dropped an offer to purchase a house near the one Kim Kardashian and Kanye West just purchased.

According to TMZ, Ray J just wrote a $2.7 million offer to buy a Hidden Hills mansion 8 doors down from Kim and Kanye.

Ray and his business manager, David Weintraub, perused the grounds Friday afternoon and then wrote the offer.

As for why he wants to live so close to Kim, Ray says it’s already his hood; he lived in the vicinity longer than Kim so if anything she’s the carpetbagger.