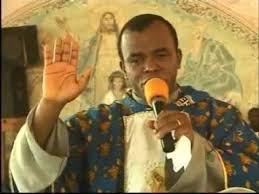 He spoke while delivering a sermon tagged, “From Good luck to Bad luck,” during the end-of-year mass Wednesday night at the Adoration Ground, Emene, Enugu.

Rev. Father Mbaka, Founder of Adoration Ministry, Enugu said Jonathan has surrounded himself with very corrupt public officials. As a result, he said, the President has turned a blind eye to their corrupt activities while millions of Nigerians suffer daily in abject poverty and endless insecurity.

“Jonathan surrounded himself with very corrupt officers who advise him. Nigerians are sick and tired of wasting innocent lives without government doing enough to stop the destruction.”

He said he and millions of Nigerians were disappointed by the government’s failure to ensure the release of the Chibok girls kidnapped by the Boko Haram terrorists over 200 days ago.

“Up till now, nobody knows the whereabouts of the innocent Chibok girls kidnapped by Boko Haram and we say we have a government that cannot guarantee the welfare, safety and security of the citizens,” he told the congregation of over 30,000 worshippers.

The cleric said he resisted delivering the sermon which he said came from the Holy Ghost but that God warned him to ensure the message was given to the nation not minding whose ox was gored.

Fr. Mbaka recently anointed Mrs. Patience Jonathan as the next First Lady in 2015. The First Lady, and the Deputy Senate President Senator Ike Ekweremadu worshipped at the Adoration Ministry where the First Lady admitted that she experienced “a spiritual rebirth.”

Fr. Mbaka that day released some birds that he said would go and fight for Jonathan.

But on Wednesday night Fr. Mbaka said Jonathan was going nowhere as far as next year’s election was concerned, recalling that one of the birds – which he released during Mrs. Jonathan’s visit has refused to fly.

“All the other birds I released flew away but the healthiest of them which is Jonathan’s bird could not fly. I tried to make it fly but it could not fly,” he recalled to a hugely excited congregation that cheered him on.

When Jonathan was aspiring to become Nigeria’s President, Mbaka said he was happy like other Nigerians but that the bad luck which millions of the citizens had faced since he came into office was quite disturbing; hence the masses want a change.

Fr. Mbaka criticised other priests who, he alleged, visited the Presidential Villa and other Government Houses in the country to hold “Breakfast Prayer” with the politicians only to collect fat envelopes of money rather than “tell the politicians the level of hardship the poor masses are suffering.”

He added: “The men of God only go there to dine and wine with the leaders for their own welfare without telling them the truth. But I’m happy that I, Fr. Mbaka, I’m not that type of priest. If you want money, I dash you money because the God I serve has blessed me abundantly.”

Commenting on the presidential candidate of the All Progressives Congress (APC) and former Head of State General Muhammadu Buhari, Fr. Mbaka, said Buhari cannot Islamise Nigeria as being rumoured in some circles.

He said he had never met the General but recalled that he fought corruption seriously as Head of State.

“I don’t know Buhari. I have never sat with him before. I am not being partisan, but I want total change in Nigeria.
“Buhari cannot make Nigeria an Islamic country because we are in democracy. It was IBB government that dragged Nigeria into OIC. When Buhari fought corruption, people became careful about their actions. Anyone who says Buhari will Islamise Nigeria is not being fair,” said Mbaka.

He added that he was not bothered whether the next President would be a Northerner or Yoruba or Igbo so long as the person fights corruption and means well for the citizens.

“If a northerner will rule the country and insecurity will stop, so be it. If a Yoruba man will rule Nigeria in 2015 and we have peace and stop the shedding of innocent blood, so be it. Nigerians are tired of wasting innocent lives,” he said.

The end-of-year Adoration mass was attended by some notable politicians from Enugu, Ebonyi and Anambra States.
Source: Dailytrust