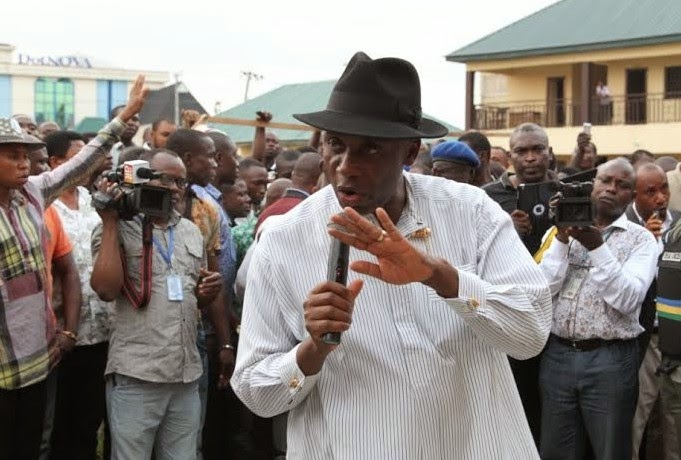 The Rivers State Government has condemned the threat by the Peoples Democratic Party in the state to force its way into the Adokiye Amiesimaka Stadium, Port Harcourt, for its presidential rally.

The state government had reportedly refused to approve the state PDP’s application to be allowed to use the stadium for the event on grounds that the facility was still under construction.

The ruling All Progressives Congress in the state and the PDP have been at loggerheads over the opposition party’s insistence that it must use the stadium for its rally.

PDP had argued that since the APC had used the stadium for its (APC) presidential campaign, it would be unfair to deny it the facility for the same purpose.

But a statement by the State Commissioner for Information and Communications, Ibim Semenitari, in Port Harcourt on Sunday, indicated that the stadium was still under construction.

Explaining that the facility was currently unsafe for use, the commissioner warned that the state government would not joke with the responsibility to guarantee the safety of lives and property of the people irrespective of the person that was involved.

“At a different time and under different circumstances, the Rivers State Government would have ignored the PDP’s ranting.

“But with the party’s penchant for violence and its recent bombings of people and property all over the state, it is pertinent that the Rivers State Government raises this alert and sounds a note of warning to the PDP that the Rivers State Government will not trifle with its responsibility to guarantee the safety of lives and property irrespective of whom is affected.

“The matter of the Adokiye Amiesimaka Sports Complex is a simple one. The complex is still under construction. As a work site, it is an unsafe environment for use at this time.

“The PDP makes reference to the fact that the APC had held its rally at the same venue. What they failed to mention is that the contractor was moved out of site during the time the APC rally held and remobilised to site right after that rally”.

Semenitari noted that the Rotimi Amaechi administration was working towards ensuring the completion of its projects within the next five months, adding that the state government would not be able to achieve that goal if it moves the contractors out of site.

According to her, the state government was magnanimous enough to approve for the PDP in the state the use of the Liberation Stadium for its presidential rally.

Semenitari pointed out that the state PDP’s resolve to unlawfully break into the stadium was a “clear” determination to cause the breakdown of law and order so as to fulfill the threat by some of its members to set the facility ablaze.

“Unlike the PDP that has consistently refused the APC the use of stadia and other facilities in Abuja and other states, where it is in control, the Rivers State Government has magnanimously offered the PDP the use of the Liberation Stadium, Elekahia, which is also a state facility.

“The resolve of the PDP to unlawfully break into the Adokiye Amiesimaka stadium is therefore a clear determination to create chaos, cause breakdown of law and order and perhaps fulfill the threat issued by some of its members that they will burn down the complex”, she stated.