Greed has driven husbands to turn on wives, parents to turn on own children as witch doctors are now turning albinos bodies into charms and potions as the presidential election approaches,in a trade allegedly fuelled by some of the country’s most powerful people. 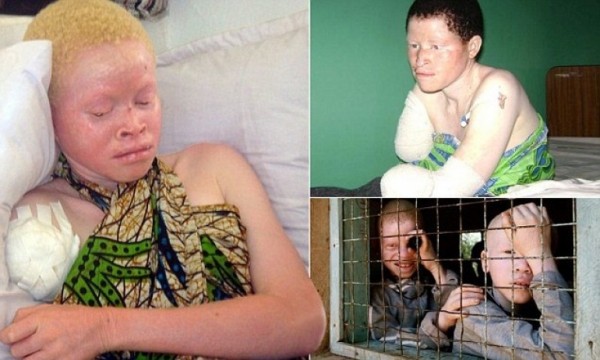 There have been 74 killings and 59 survivors of attacks. Even the dead are not safe: 16 graves have been robbed, recently, a four-year-old Pendo Emmanuelle Nundi was abducted, her father and uncle were both arrested in connection with her disappearance.
Mwigulu Matonange was just 10 when he was attacked by two men as he walked home from school with a friend.

They chopped off his left arm, before disappearing back into the jungle with their ‘prize’.
‘I was held down like a goat about to be slaughtered,’ he said

Josephat, who himself is albino, added: ‘People with the albinism are being hunted and killed for our body parts. It is because people want to become rich.

‘We are still living in danger. It is because people, they have different ideas. Some people, they are thinking they should get our body parts and sell to different places.

‘The question is, why? Why now? And who is behind the killings?’