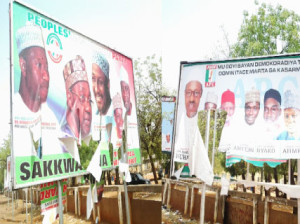 The Sokoto State Task Force on Illegal Structures, has embarked on the removal of bill boards illegally erected by politicians in the state.

The Chairman of the Task Force, retired Sqdn. Ldr. Aminu Bala told the News Agency of Nigeria (NAN) on Friday in Sokoto that the exercise commenced on Thursday in Sokoto.

According to him, the exercise will continue up to the period of the election not minding whose ox is gored.

“We are not out to witchhunt any candidate or political party, the aim is just to sanitize the city and make sure that nobody tramples on the sokoto master plan.

“Therefore, any candidate or political party wanting to erect bill boards must seek the necessary approval from the state Urban and Regional Planning Board”, Bala said.

He said areas where the bill boards had been removed include Dandima and Sultan’s Palace round about, as well as Assada junction, Manuri, Zaria, Sultan Abubakar, Aliyu Jodi and Modibbo Adama roads.