Taxi Driver Gets $900 Tip For A Two-minute Drive 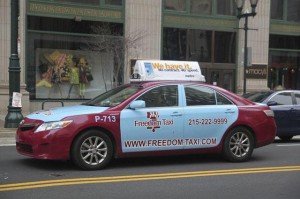 A Philadelphia taxi driver was tipped almost $1,000 on a fare of less than $5 for a ride that lasted only about two minutes, the taxi company said. UPI has more:

Freedom Taxi of Philadelphia said driver Oumar Maiga drove a man less than a mile last month and the passenger chose to pay the $4.31 fare using a credit card.

Everett Abitbol, co-founder of the company, said Maiga looked at the receipt and was shocked to see the customer had added a $989.98 tip.
He said the company waited for 30 days for the payment to be clear before making the announcement. Abitbol said no one knows the identity of the passenger, who assured Maiga the tip was intentional.