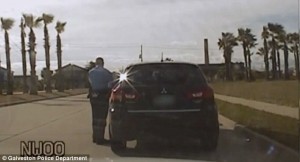 A Texas police officer reportedly arranged for members from his patrol squad to pull over his girlfriend so he could propose to her in an elaborate ruse which was caught on dashboard camera. Yahoo! News reports:

KHOU-TV (http://bit.ly/1yGrY6B ) reported Monday that Sara Wolff said “yes” to Galveston police Officer, Gregory Parris and that they will marry in July.

The patrol car video shows a car with sirens blaring stopping Wolff’s vehicle. That officer tells Wolff she has a broken taillight and that she also faces outstanding warrants.
http://www.newbalanceshoesinc.com new balance 409
The unwitting Wolff starts to cry.

Parris, who was watching the whole episode from another patrol car, then drives up and walks toward his girlfriend. Her tears turn to laughter as he gets down on one knee, produces a ring and asks her to marry him.