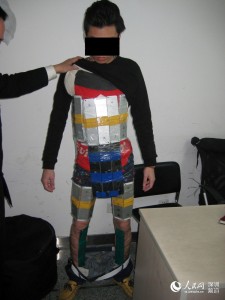 Authorities in Hong Kong say they caught a man who attempted to smuggle 94 iPhones into mainland China on Sunday by strapping the devices to his body. The Huffington Post has more:

Customs police clued into the man due to his odd gait and posture, reports China’s People’s Daily online, which, judging by photos taken by customs officials, was understandably impacted.

A routine search of the man’s luggage produced no contraband, but he set off a loud alarm when he attempted to walk through a metal detector, The Independent adds.

iPhones seized from the man include the 5s, 6 and 6 Plus models, all of which are available for purchase in China. However, per CNBC, the smartphones retail for a lower price in Hong Kong than in mainland China. The International Business Timesestimates this man’s contraband was worth more than 300,000 Yuan, or $48,000.