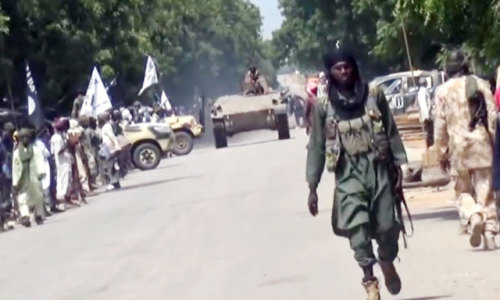 The Boko Haram onslaught in Nigeria northeast was met with a stiff resistance by the army on Wednesday, as military authorities, yesterday, said 78 insurgents were killed during the two-hour gun battle that ensued following the attempt by the terror group to capture a military base in Biu, Borno State.

Terrorists numbering hundreds, had in the early hours of Wednesday, invaded Biu, in an attempt to capture a military base, with the aim of carting the weapons in the armoury. But the army was up to the task and dealt the terrorists’ attempt a big blow.

At least 78 bodies of the terrorists have been recovered, military sources told Vanguard yesterday, with residents trooping to the scene of the fighting to see the dead gunmen and their vans riddled with bullets.

Defence spokesman, Major General Chris Olukolade, who gave the number of insurgents killed, said the military was more concerned about the success of the operations than the figures of terrorists killed during operations.

“What is important now is for us to consolidate on the victory, recapture areas where the terrorists are presently operating and restore peace to the entire north east,” he said.