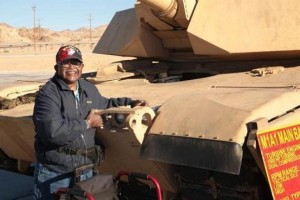 A nearly 80-year-old Marine veteran currently suffering from serious medical issues was granted his final wish by the U.S. Marine Corps, and it’s none other than to hug a war  tank. UPI was there:

Kenneth R. White served 17 years as a tanker for 4th Tank battalion, according to the Marine Corps. A San Diego native who now lives in Las Vegas, White suffers from stage five kidney failure and other physical problems. His final wish was to hug one of the machines he worked with for so many years.

On December 22, 2014, the 1st Tank Battalion at Marine Corps Air Ground Combat Center Twentynine Palms granted White’s request, taking the veteran on a tour of battle simulators and features on the M1 Abrams — a modern battle tank vastly different from the Shermans, Pershings and M48 Pattons with which White worked.

White was photographed hugging one of the M1 Abrams, and the tour ended when he was brought to a Sherman tank. Using a walker and breathing with the help of an oxygen tank, White stood in silence before the armored vehicle, the Military Times reports.