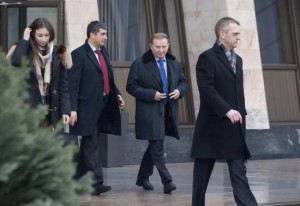 A new round of peace talks were about to start on the Ukraine crisis on Saturday, even as fighting between Kiev government forces and pro-Russian separatists raged in the east, claiming civilian and military lives. Reuters report:

A Reuters reporter in the Belarussian capital saw the main participants in the so-called ‘contact group’ — including Ukrainian former president Leonid Kuchma, a Russian diplomat and rebel officials — arrive at Minsk airport and then drive off towards the city.

The talks, under the auspices of the Organization for Security and Cooperation in Europe (OSCE) whose official also arrived in Minsk, will be the first since September when a ceasefire was agreed.

Much-violated from the start, that truce collapsed completely as the rebels launched a new advance last week. Heavy shelling continued in Ukraine’s eastern regions as the separatists sought to tighten a circle around government forces clinging on to control of the strategic rail and road junction of Debaltseve.

Regional police chief Vyacheslav Abroskin, in a Facebook post, said 12 civilians had been killed on Saturday by separatist artillery shelling of the town, which lies to the north-east of the big city of Donetsk.