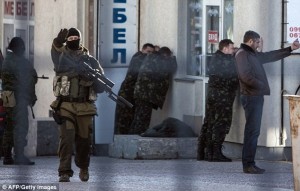 Ukraine on Friday reported its first military death of 2015 in its ongoing conflict with pro-Russian separatists, saying a soldier had been killed while five others were wounded in attacks by the rebels. Reuters report:

“In the past 24 hours one Ukrainian serviceman has been killed and another five have been injured because of provocative actions (by separatists),” military spokesman Andriy Lysenko told a news briefing.

More than 4,700 people were killed in 2014 in the conflict, which has provoked the worst crisis in relations between Russia and the West since the Cold War.

Lysenko gave no details of the circumstances of the attack which killed the soldier but he said there had been frequent shelling and mortar attacks by separatists in areas of eastern Ukraine, including around the international airport in the big industrial city of Donetsk.

He said Ukrainian forces were in general abiding by the terms of a shaky ceasefire agreed in September and were only replying when they came under fire.

“In general, our servicemen are not giving in to provocations and are not opening fire,” he said.