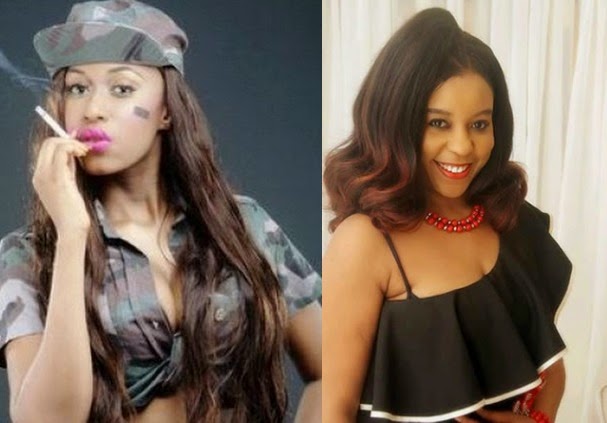 They are both celebrities, but one is definitely more recognized than the other these days.

Fast rising singer, Cynthia Morgan and Queen Ure have not been in good terms ever since Ure dragged Cynthia to court over name infringement.

The court then banned radio stations from playing the Northside recording artiste songs due to name infringement.

Cynthia Morgan refused to take the shot lying down so she  blasted Queen Ure on Instagram saying  “I never knew this lady existed, obviously, she is not in my generation. My mum doesn’t even know you because you weren’t relevant in your time not to talk of now… You are a failed artiste. You are lying around that my Porpori has been banned, how? I didn’t steal your song, my dog sings better than you. Where is your case and sense? I know your story and it is super, don’t let me start,”

Punch contacted Ure on phone, and asked her why she’s yet to respond to Cynthia’s diss, Ure said she’s is queen and she doesn’t have time to exchange words with anybody.

“The court has said that her song should not be played and that is it. The title of her song is the same pronunciation as mine even if it is not spelt the same way. The court is aware of all of these and the difference in spellings even before it gave the injunction.” Ure said.

“The order is yet to circulate to all radio stations and it will be done soon. The injunction is there and anybody who doesn’t want to comply with the injunction knows the consequences. The Federal High Court gave the injunction and it has to be complied with. Nobody is above the law.

There is nothing personal here. I am not at war with anybody. I am not fighting with anybody. Come on, I don’t intend to go on social media to reply anybody. Such things don’t mean anything to me. This is a legal matter, I don’t engage in such nonsense. A queen doesn’t behave that way, I am a queen and I can never do that,”